Backstory
The latter half of the nineteenth century was a time of great technological changes. There were many features that are familiar to the twenty-first century: railways, electric telegraph and later the telephone, gas and electric lighting to name but a few. This article looks at how ACD uses the railways in the Canon, to propel the plot forward. 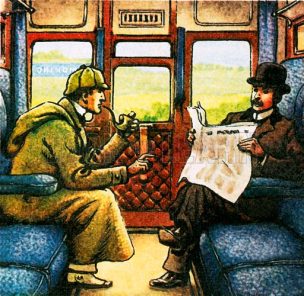 However, before the railways came the steam engine, which itself was developed from the steam pump, used to drain water from coal mines . Space precludes a detailed history of these; suffice to say that early experiments in harnessing steam power eventually resulted in steam engines with a wide range of applications, from water pumping to spinning cotton, in the early nineteenth century. As well as rapidly mechanising production in the new factories, the steam engine was the driving force behind the new mode of transport: the railways. Steam trains emerged in the 1820s and would power the railways throughout Britain until the 1960s, when they were superseded by diesel and electric trains. Steam trains not only connected major cities and minor towns and villages, they slashed the travel time. The distance from London to Birmingham is approximately 120 miles (193 kilometres) which took several hours by stagecoach. By train, however, the journey time was reduced to approximately 70 minutes. In the time frame of the Sherlock Holmes Canon, from 1882 to 1914, inter-city travel by train was commonplace, at least for those with financial wherewithal to afford the fares.

In the 1860s a second mode of urban transport, the London Underground emerged and rapidly expanded. Tube trains running on the Metropolitan Line from Paddington (then called Bishop’s Road) to Farringdon Street started in 1863 . However, until these too were electrified, they were a noisy and smelly way to travel around the metropolis . Possibly for this reason, tube trains only appear three times in the Canon. The tube plays a small, but solid, plot point in ‘The Red-Headed League’ when Holmes and Watson travel by underground to from Baker Street to Aldersgate Street (present day Barbican), before making their way to Saxe-Coburg Square by foot. By comparison, a hansom-cab drawing up and two men alighting, would be as subtle as a twenty-first century police car, complete with flashing lights.

The tube network plays a somewhat larger role in ‘The Bruce-Partington Plans’ with dramatic scenes taking place at Aldgate, the terminus of the Metropolitan Line, and further around the track of the Circle and District Lines near to Sloane Square. Confusingly for the modern-day reader wishing to analyse this story, the District Line was originally called the Metropolitan and District Line, until it was shortened to District, possible to avoid confusion with the ‘other’ Metropolitan Line . Finally, the underground is mentioned in passing, in ‘The Beryl Coronet’ when Alexander Holder is seen awkwardly running ‘from the direction of the Underground station’, which we infer is Baker Street. It is not clear whether Holder took the tube to Baker Street, or made his way by cab and completed the rest of his journey on foot. After this, there are no further adventures involving tube trains mentioned in the Canon. Trips across London are made on foot or by hansom. This is regrettable, given the dramatic possibilities of a tube network with ticket halls, stairs, corridors, station platforms, interchanges and miles of track.

The Investigation
Many Sherlock Holmes stories begin in the sitting room in Baker Street, which doubled up as his consulting room. The client relates their problem, answer Holmes’s probing questions and the investigation begins. Holmes will consider the facts, depart to inspect the scene of the crime, or despatch a telegram. In a handful of stories, however, the investigation is more urgent and the reader foregoes the preliminary description of the client’s troubles in the comfortable surroundings of Baker Street. The introduction to the case is transferred to a railway carriage and the backstory is delivered while our heroes are racing through the countryside. In ‘The Stockbroker’s Clerk’, for example, it is the client, Hall Pycroft, who narrates his involvement with the Franco-Midland Hardware Company Limited on the fast train to Birmingham. Time is used well. The seventy-minute train journey allows Pycroft time to tell Holmes and Watson of his recent strange employment. Within the story’s narrative, time itself is compressed as the history of this company, that boasts of having ‘one hundred and thirty-four branches in the towns and villages of France, not counting one in Brussels, and one in San Remo’ , but only two directors and operating out of rented offices in Birmingham, is described in a handful of paragraphs.

In other cases, such as ‘The Boscombe Valley Mystery’ and ‘Silver Blaze’, the facts are gleaned from collated newspaper reports . The advantages of this are many. In transferring the exposition of the backstory from the consulting room at Baker Street to the railway carriage, the investigation gets off to a flying start. As in ‘The Stockbroker’s Clerk’ the journey time is used to good effect. Although, in-story, the narration of the facts of the case is used to inform Watson and refresh Holmes’s understanding of these, it serves a vital purpose. It draws us, the readers, into the story, while it is happening. We are not just reading the adventures; we are taking part in the investigation. We are sitting alongside Holmes and Watson, unseen and silent, enjoying the privilege of hearing the facts of the case when as our heroes do. Thus, when Holmes and Watson arrive at the scene of the crime, Holmes has re-evaluated the reported facts, Watson knows as much as Holmes does, and most importantly, the readers have been brought up to speed. The investigation can commence immediately. The journey to Boscombe Valley is used well. Having reviewed the various newspaper reports, Holmes and Watson do not waste time picking over the bones of the case. After recounting the known facts Holmes forbids any further analysis. Indeed, he refuses to discuss the case until the train reaches Ross. Holmes busies himself in reading his pocket Petrarch . In doing so, he cleanses his intellectual palate, like a diner at a fine dinner partaking of a plain sorbet between courses.

Analysis and Deductions
In ‘Silver Blaze’, ACD provides the reader with a mathematical exercise to solve, if they have the mental energy. Holmes snaps shut his pocket-watch and observes the Dartmoor train is travelling at fifty-three and a half miles per hour. Watson accepts this and remarks that he has not observed the quarter-mile posts. However, neither has Holmes, who simply points out the telegraph poles are 60 yards apart and that the calculation is a simple one . This is a demonstration of Holmes’s method. Before thinking about the case, he warms up with deductions about his client, or in this case, a mathematical problem. Holmes knew enough about human anatomy to understand that muscles must be warmed up before they are tested in sport. And, given that the human brain is the thinking muscle, the organ that receives and processes data from the five senses and directs the body to physical movement, it too must also be warmed up before it can function at optimum ability. Hence, the start of an investigation is preceded by a short mental exercise to keep Holmes’s analytical brain razor sharp. But, what was this calculation involving time, speed and distance, that Holmes stated was so simple?

We have three clues to work with. Firstly, the telegraph poles are 60 yards apart. 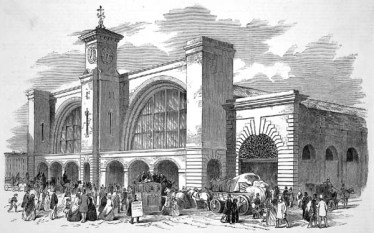 Secondly, Holmes used his pocket-watch, therefore must have been counting the number of telegraph poles the train passed in a given time. The third clue is that there are 1760 yards in an Imperial mile. If we divide 1760 by 60 we find the train will pass 29 (actually 29.33 recurring) telegraph poles every mile. So far, so good. Now we have to determine how long the train takes to pass 29 telegraph poles. If the train passes 29 poles in 60 seconds, it is travelling at just under one mile per minute. One mile per minute is equivalent to travelling at 60 miles per hour. If the train passes more than 29 in 60 seconds, it is travelling faster than 60 mph. On the other hand, if the train passes fewer than 29 poles in one minute, it is travelling slower. A few moments trial-and-error iteration leads us to deduce that Holmes counted 26 telegraph poles in the timed minute.
Given this assumption, the calculation is as follows:
26 x 60 = 1560. Dividing this by the ‘baseline’ figure of 29 gives us a speed of 53.8 mph. Allowing for the inbuilt error margin created by rounding down 29.33 recurring to 29, this is a realistic estimation of the train’s speed. Of course, Holmes’s calculation would have been more precise. It is possible to make an exact calculation, based on how quickly the train passed 87 telegraph poles over three miles (by multiplying both sides of the equation by three, we eliminate the rounding error), but the mental arithmetic gets harder.

This is, of course, merely a warm up, an entrée for the main course of the investigation. Now his brain is warmed up, Holmes gets Watson to recount the reported facts from various newspapers. Having digested these, they are discarded and our heroes resume their journey in silence. Holmes’s method obviously benefits Watson too. By this time, the detective and the doctor are working as a two-man team and in ‘Silver Blaze’, Watson shines. It is Watson who asks the relevant question about whether to stable door at King’s Pyland was locked after the stable boy challenged the night-time visitor . It is Watson, the medical man, to whom the detective defers during the examination of the cataract knife . Finally, it is Watson who saves our heroes a long walk when he points out the double trail of hoof-marks: ‘One for you, Watson’ . A vital clue that Holmes acknowledges and not only for the relief of tired legs – it flips the entire case on its head.