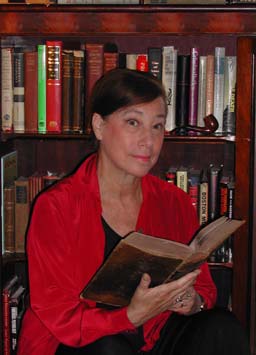 La Gazette du 221B : I will start with the traditional question: may you introduce yourself and your Sherlockian journey?
E.J. WAGNER : I’m EJ Wagner and met I Sherlock Holmes in the Bronx NY when I was 10 years old. My English teacher would take some of my class to the park to eat our lunch picnic style and read the Holmes stories to us. Mr Holmes and I have been companions ever since.
G221B :  You are a crime historian: can you describe your job?
E.J.W. : I research, study, analysis and lecture on the history of crimes, particularly those of scientific interest. As almost everything has been against the law at one time or another,I have a lot of range.From witchcraft, to lycanthropy, to piracy. A few politicians get in there too.

G221B :  How did you come to exercise this unusual profession? What was your background??
E.J.W. : I came from a story telling family and trained as a dancer and an actor. A cousin of mine, Theodore Ehrenreich, was a pathologist who introduced me to the rigors of the autopsy suite when I was studying death scenes.
I became fascinated and kept returning to learn more.
Some where along the line I put the acting and the forensic sciences together in public programs and in articles for magazines.
G221B :  The theme of Science in Sherlock Holmes has been studied only recently. What do you think generate this interest?
E.J.W. : The general growing interest in forensic science plays a role, as does the emergence of new films and books about Holmes and his creator.
G221B : What motivated you to write the science of Sherlock Holmes?
E.J.W. : An editor at John Wiley Publication wrote and asked me to. He had read an article about my lectures at Stony Brook University and thought it would fit nicely in Wiley’s list. I agreed.
G221B : How did you research for this book?
E.J.W. : The book was largely based on my lectures-the lectures were based on trial transcripts, interviews with medical examiners, crime laboratory workers, time spent in autopsy rooms,old newspaper accounts, and my library of antiquarian medical and legal books

G221B : Forensic science is almost as old as humanity, but do you see Victorian era as a turning point and why?
E.J.W. : I entirely disagree that forensic science is as old as humanity. Early dissections of cadavers were performed by executioners as punishment for the convicted -to humiliate -or, later, my medical folks to learn how the body functioned.Early writing on the subject was full of myth. superstition, and misinformation. There was no method to it.
The early medical dissectors worked to learn how the body lived-it was not until much later that dissections were performed to establish how the body died.

G221B : Is SH a good illustration of science of this period?
E.J.W. : It gives a fair understanding of how science was starting to be applied to crime. That was the age of the generalist-one individual dabbling in many different areas. Today forensic scientists specialize-there is too much information for one person to be expert in everything.
G221B : Do you think the success of Holmes story raised awareness in forensic science?
E.J.W. : Certainly the public was made aware that it was possible for scientific reasoning could be applied to solving crime-and as a result the public was more open to funding crime laboratories.

G221B : Do you think, as Edmond Locard did, that Sherlock Holmes should inspire actual police methods, or would you keep SH strictly in the field of fiction?E.J.W. : Locard said that studying the Holmes stories would benefit students, particularly in the examination of small bits of trace evidence, such as dust. The careful preservation of crime scenes , establishing the chain of evidence are all part of modern techniques. So in general terms Holmes is still an inspiration. But the world of forensics has grown much more complex, many old beliefs have been discarded, and in the interests of justice we must keep up.
G221B : According to you, is SH the epitome of scientific detective, and why?
E.J.W. : I see Holmes as an entertaining companion, who tries to establish a scientific method for preserving and evaluation evidence.
G221B : You wrote mystery novels, How much of an inspiration was SH ?
E.J.W. : I’ve written short tales of psychological suspense, not novels. Holmes did not come into them.
G221B : Do you use scientific themes in your writing?
E.J.W. : When I write articles for journals and magazine and for my blog, (EJdissectingroom) I certainly do. As for fiction,  I haven’t in the past, but I am working on a fiction project now that is heavy based on science.

G221B : Do you plan to write another novel or another essay about Sherlock Holmes? If yes, what would be the topic?
E.J.W. : I’m in the planning stage of a work of fiction in collaboration with another writer and we have agreed to keep exact topic a secret for now. My lips are sealed:)